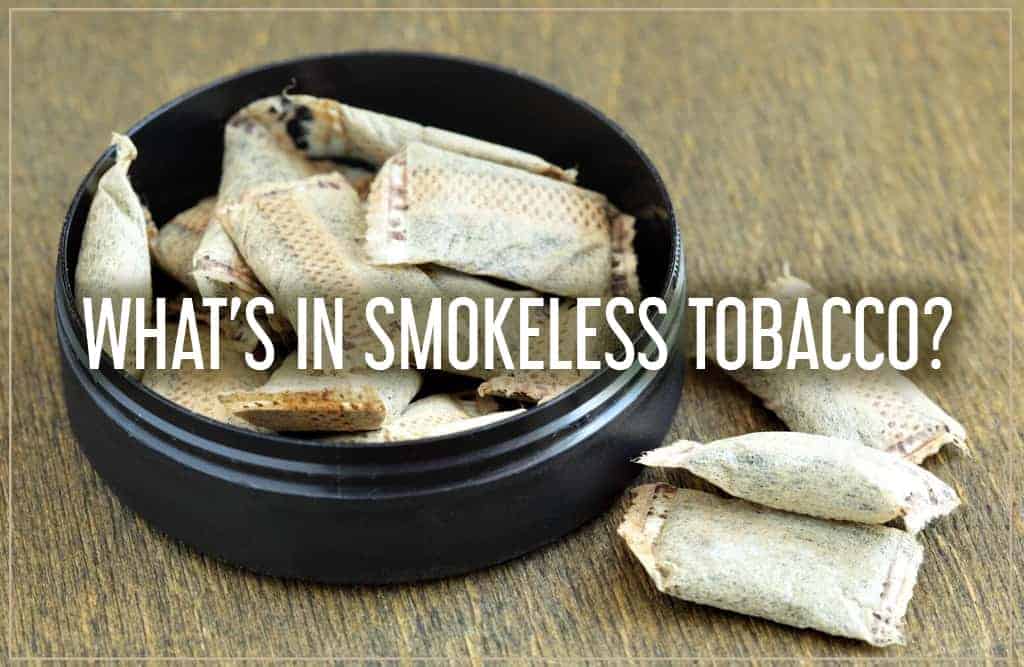 Don’t have time for dillydally, so let’s jump right into it! Here are just a few different chemicals in smokeless tobacco.

Polonium is a radioactive material found in tobacco. It’s in fertilizers that are used on tobacco farms and is absorbed through the tobacco roots and stored in the plants’ tissues.

Polonium is so powerful that it has been used as a neutron trigger or initiator for nuclear weapons.

The tobacco companies have been unsuccessfully trying to figure out a way to get it out of the plant for decades.

Nitrosamines are formed in chewing tobacco during the growing, curing, fermenting, and aging of tobacco and is another great reason to kick the habit now.

Formaldehyde is a chemical that you definitely want to keep out of your body as long as you’re alive.

It’s is great for preserving dead bodies, but you ain’t dead yet, so keep it out of your body!

It can cause damage to your pulmonary system, and it’s also known as a probable carcinogen (cancer-causing chemical).

There has been researching that has looked into human exposure to cadmium, and linked it to lung and prostate cancer. It becomes part of the tobacco plant because of the type of fertilizers used.

Arsenic has been a handy tool for murderers and assassins for a very long time because it was undetectable (until the Marsh test was invented to spot it).

If you use smokeless tobacco, you’re literally giving yourself a daily dose of poison.

Cyanide has also been used as murder tool in the past because of it’s extremely high toxicity. It was used by the Nazi’s to kill millions in the gas chambers and has been used here in the U.S. for capital punishment.

Some spies would allegedly carry cyanide pills so that if they were caught, they could avoid torture by kicking their own bucket.

When you dip, the lead in chewing tobacco is absorbed into your bloodstream. It gives the expression “Eat Lead” a whole new meaning.

Lead can affect many different aspects of your health, including your central nervous system, kidneys, and cardiovascular system. It can also weaken your immune system and make you more vulnerable to diseases.

Now, it’s true that the amount of these different harmful chemicals inside a single can of dip is very small, so is dip really bad for you It’s bad for more than just your health; it’s bad for your wallet, and it has devastating effects on others.

Quittin’ ain’t easy, which is why Baccoff has a clinically proven, 7-step program for quitting smokeless tobacco.

Grab Some BaccOff and Quit Without Giving Up!

2 comments on “What’s in Chewing Tobacco”